Preordering the Model 3 got me a way better car! 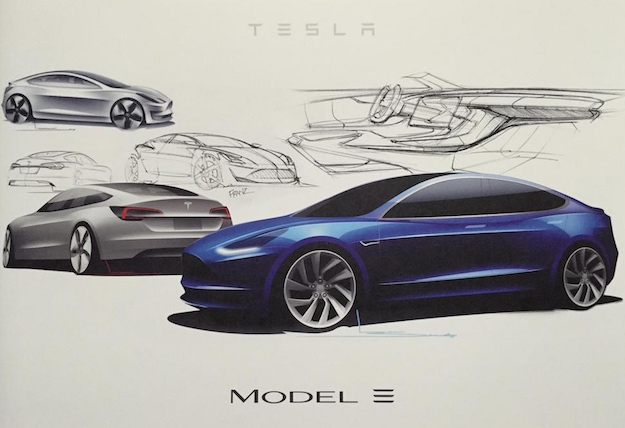 It was April 1st 2016 I saw a friend of mine pre-order the Model 3.  At the time, I knew of Tesla, but I wasn't following it closely enough to know that a Model 3 unveiling was taking place the day before.  My friend ordering a Model 3 immediately caught my interest.  I discussed it with my father that we may go in on a Model 3 together and share the car.  He was very agreeable to that so I placed my pre-order. Having placed the pre-order, Tesla delivered me an 8.5" x 11" poster along with a note that said "Thanks -Elon" or something like that.  I ditched the note, but I have the poster on my wall and I am looking at it right now. It was a really nice touch.  Later somebody on Twitter asked Elon if he would give anything special to those that pre-ordered.  Elon said that there would be something special for those that pre-ordered and that raised a bit of excitement.  Nobody knew what it would be and some speculated that it was the poster he already had sent out. December 2017 we started seeing more sightings of the Model 3's and production was by the hundreds.  It became clear that the gift from Tesla was a die cast Model 3.  Although, I never got one, many people did.  I could have pushed but it wasn't clear when the cut-off was for early reservation holders.  I reserved a day after the unveil so I didn't know if I qualified.  As well, the day of delivery, I was super excited and the die cast gift completely fell off my radar and I never even asked. But, the car.  Oh the car.  Who cares about a toy, when you have the real thing?  Man what a sweet car it is. My father and I originally intended on getting the Standard Range Model 3.  But sometime in 2017, my dad test drove a Model S.  He now drives a Model S. And that left the Model 3 reservation all to me.  The Standard Range Model 3 is an amazing car.  If I didn't own one, I would have converted the day they release it.  But I went ahead and got one anyway.  Why?  Good question. In about May 2018, Tesla sent me an email telling me I could configure my Model 3.  But the only available option was the Long Range Model.  500Km range with glass roof, premium sound, premium materials, heated back seats, USB ports front and back, adjustable seats and steering wheel, fog lights were the specs.  Knowing the battery size is what really drives cost down, I thought it would be good to purchase a smaller battery and save money.  But something happened.  I caught wind of the Cap and Trade Cancellation.  The rebate in Ontario included $14,000 CAD to purchase an electric vehicle and the Model 3 Long Range qualified. The premium upgrade package was going to be an additional $17,000.  But if I waited, I risked Doug Ford being elected and potentially losing the $14,000 rebate.  At the time, it wasn't certain this would happen.  But it looked probable.  So the decision was, wait an indeterminable amount of time (in hindsight, it would have been 8 more months) and and get a the Standard Range version, or spend the extra $3,000 to get he much better car. At the time though, Tesla was limiting those who could order to people who had pre-ordered.  That's me!  In the end, I paid about $3,000 to get a car worth $17,000 more and I got it 8 months before I would have saving over $1,000 in fuel in that process as well.  I am super happy with my purchase and I would pre-order the Model Y just because I might want one.   I might also pre-order the pickup.  At this point I would rather have the reservation and not need it, then need it and not have it.  And I might get a die cast out of it.